How are homeless people affected by health disparities?

Homelessness is often associated with enormous health inequalities, which include a shorter life expectancy. Not only are the health inequalities impacting the homeless population physically, but also mentally. When looking at social determinants, homelessness is the main reason for poor health, but homelessness itself results from many adverse social and economic conditions. Often homeless people have to rely on the help of emergency rooms, hospitals, and clinics that are specially established for the poor. Due to the homeless population increasing, it is becoming more diverse and people are from many different backgrounds. The main causes for homelessness include poverty, illnesses, and trauma, although there could be many other reasons depending on what the person has experienced, for example, harsh living condition

The above image shows some causes that could potentially increase the likelihood of becoming homeless.

Who is impacted by homelessness?

“A study conducted in March 2020 showed that:

How is the homeless population affected by mental illnesses?

Mental disorders such as depression, schizophrenia, and anxiety are among the most common types of mental illness in the homeless population. This was demonstrated in a study, conducted in 2017, which showed that “more than 40% of homeless teenagers struggled with depression, compared to 28% of housed teens.” Also, something that is very saddening is that of all the homeless individuals, 20% are struggling with a mental illness. This percentage is considerably higher than the global housed population. Additionally, it is also important to note that living a life of homelessness could potentially lead to the development of behavioral issues, such as substance abuse (alcoholism).

A way to help, in order to prevent mental illnesses and behavioral issues among the homeless population, is to provide social support and allow for communication to happen between you and a homeless individual. This could be achieved by volunteering at homeless shelters.

How do the inequities damage their physical health?

According to the National Health Care for the homeless council, “people who are homeless have higher rates of illness and die on average 12 years sooner than the general U.S. population.” This study shows just how necessary it is to help the homeless population. Also, because homeless people are often exposed to severe weather and malnutrition, it is so important to help them. Unfortunately, homeless people are often not able to get the proper healthcare they need and this is due to not having access to the social determinants listed below.

What social determinants impact the homeless population and why? 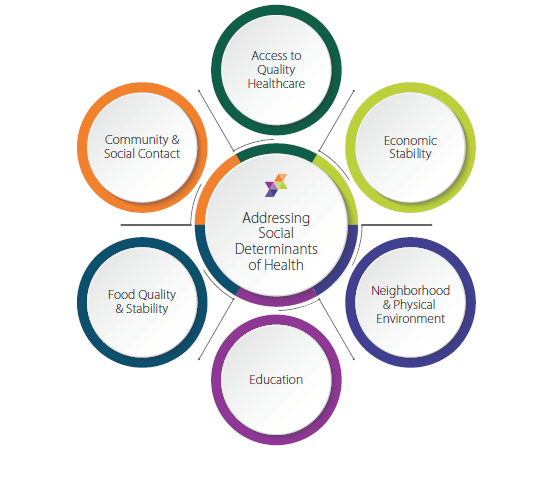 Social determinants impact the homeless population because they limit the possibility of getting proper healthcare.

Throughout conducting my research, I learned about many fascinating ways on how to help the homeless population, and although there will always be some people who will be homeless, there are some ways to close the disparities between the homeless and the settled people. I have already mentioned above how providing social support can avoid mental illnesses, but now I would like to address one of the determinants in greater detail.

I believe that in order to help fight inequality, it is necessary to tackle the root of the problem, which in this case would be a social determinant, specifically transportation. Transportation is often the problem that homeless people have to deal with when they want to visit the medical clinic or a hospital. This is often the reason why they avoid going to a local medical clinic or hospital, even though they want to.

For this reason, I have come up with the idea of a transportation service that can be operated by volunteers willing to make a difference. I think that this idea could make a very big impact in our society and allow for more lives to be saved. Although I was not able to attempt my idea, due to the COVID-19 pandemic, I think that it would be successful if it were carried out for a couple of months as a test trial.

Feedback: In the comments, please let me know:

Thank you so much for taking your time to learn about my chosen topic! I hope you enjoyed learning about the inequalities that homeless people face in the medical field!

Here is my Works Cited: https://docs.google.com/document/d/1sKA9YOFWQ8TSNtKG–c1a-iJGYMc720hu-CPBV5Boq0/edit?usp=sharing