The idea of anyone being able to become a top-earning citizen, even when starting at the very bottom, is a large reason why people believe the U.S. is so great; and this ideology is commonly referred to as the ‘American Dream’. The gap between the highest and lowest earners is called income inequality, and is a certainty under a capitalist government. By allowing every household to earn different incomes, there will always be an income disparity. However, this only becomes a problem when the gap between the richest and poorest gets so large that it cripples economic mobility –a term that generally refers to a family or household’s ability to raise their economic status intergenerationally– and causes the lowest earning citizens to sink below the poverty line. This is what has been happening since the 1970s, and has accelerated significantly since the beginning of the 21st century.

The United States had a large economic growth period starting just after WWII and ended with the oil crashes of the 1970s. One factor that helped push the growth of the economy in the United States was the GI Bill. According to Encyclopedia Britannica, the G.I. Bill of Rights is a “U.S. legislation adopted in 1944 that provided various benefits to veterans of World War II. Through the Veterans Administration… the act enabled veterans to obtain grants for school and college tuition, low-interest mortgage and small-business loans, job training, hiring privileges, and unemployment benefits”(Encyclopedia Britannica, G.I. Bill). These benefits made the American Dream a reality for many, allowing men to obtain an education that they otherwise wouldn’t have been able to afford, and open doors to higher paying jobs. However, there was a major problem with the GI Bill; it didn’t provide any opportunities for people that couldn’t or were prohibited from serving in the war. This problem created a gap in income and education between white men, and women, as well as people of color. Also during this period, it wasn’t uncommon for families to live off of a single source of income. This was possible due in part to the cost of living, as well as taxes on the poor and middle class, being drastically lower. Unfortunately, this period came to an abrupt end in 1973, when the first oil crash occurred. Also from the Encyclopedia Britannica, “The first [oil crisis] occurred in 1973, when Arab members of OPEC (Organization of the Petroleum Exporting Countries) decided to quadruple the price of oil to almost $12 a barrel… Oil exports to the United States…  were also prohibited. OPEC’s decision was made in retaliation for Western support of Israel against Egypt and Syria during the Yom Kippur War (1973) and in response to a persistent decline in the value of the U.S. dollar (the denominated currency for oil sales), which had eroded the export earnings of OPEC states. With the global capitalist economy already experiencing difficulties, these actions precipitated a steep recession accompanied by rising inflation. This forced capitalist countries to embark on a process of economic restructuring in order to reduce their dependency on oil and prompted fears that the United States might take military action in order to secure free access to its energy supplies. Although the oil embargo was lifted in 1974, oil prices remained high, and the capitalist world economy continued to stagnate throughout the 1970s”(Encyclopedia Britannica, Oil Crisis).

CURRENT STATE OF THE PROBLEM

According to this graph from an article titled Growing Income Inequality Threatens American Education, the top 5 percent highest-earning families saw a 31.5 percent increase in yearly earnings from 1970 to 2010; and the 80th percentile also saw a significant 19.6 percent increase; but the lowest 20th percentile saw a 40.1 percent decrease in income. 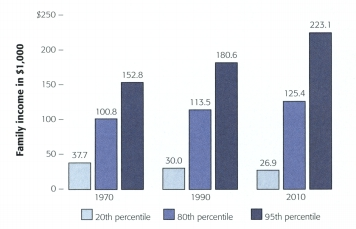 This means that the gap between the lowest 20 percent of families and the richest 5 percent of families, which was already enormous, has increased by roughly double. But drastic changes like this don’t happen out of the blue, so what is causing this gap to grow exponentially? I found in my research that a primary reason for the increasing gap comes down to jobs becoming more complex and tech-based, meaning workers need to be more highly skilled and educated. One piece of data supporting this is from the article The Dream Is Over: The Crisis of Clark Kerr’s California Idea of Higher Education. It reports that “Between 2000 and 2010, the average household income of American men with bachelor’s degrees fell by 1 percent, but the average income of those with high school diplomas fell by more than a quarter”(Simon Marginson). To look at the bigger picture, this means that in the past, a person who could not afford college, or simply decided that it wasn’t the path for them, could still follow a career path that allowed them to live comfortably. But this is quickly becoming untrue, as income for people without college degrees is plummeting year after year. To make matters worse, the price of college has also been increasing in a similar time-frame. As Ellen Schwartz and Benjamin Scafidi argue in  in What’s Happened to the Price of College?, “Since the early 1980s the ‘sticker price’ or ‘list price’ of a college education in the United States has… risen significantly faster than the overall rate of inflation” (Amy Ellen Schwartz, Benjamin Scafidi). This results in more people not being able to afford college, or having to take out large loans to do so,  increasing  risks for students’ financial future.

WHAT CAN BE DONE TO NARROW THE INCOME GAP?

All trends show this problem getting worse, so what can be done to begin narrowing the gaps between the richest and poorest Americans? For starters, more funds should be allocated to providing quality and consistent public schooling options from elementary through college. Providing better education for lower income families would be one piece in giving all Americans their fair shot at obtaining the education and technology skills required for earning higher income. Furthermore, legislation approving a higher budget for education should include increasing the average salary for teachers to more appropriately reflect the impact that they have on society and increase their earning potential. Another way to reverse the trend in rising income disparity is to provide free, and accessible healthcare for all. In its current state, the American Health Care system leaves many people fearful of obtaining treatment, and puts many Americans under a severe amount of debt. With a free and accessible healthcare system, Americans would no longer have to carry curable health problems, and would help many people get back into the workforce. These funds could come out of the Military, and Police budget, as well as increased taxing rates to the very richest Americans. In conclusion, For the U.S. to continue to thrive and maintain global dominance it requires that all citizens have equal access to education and healthcare, and the ability to pay for basic living necessities. Only then, is it possible for the population to focus on and actually obtain the higher level skills required to continue to grow and thrive.